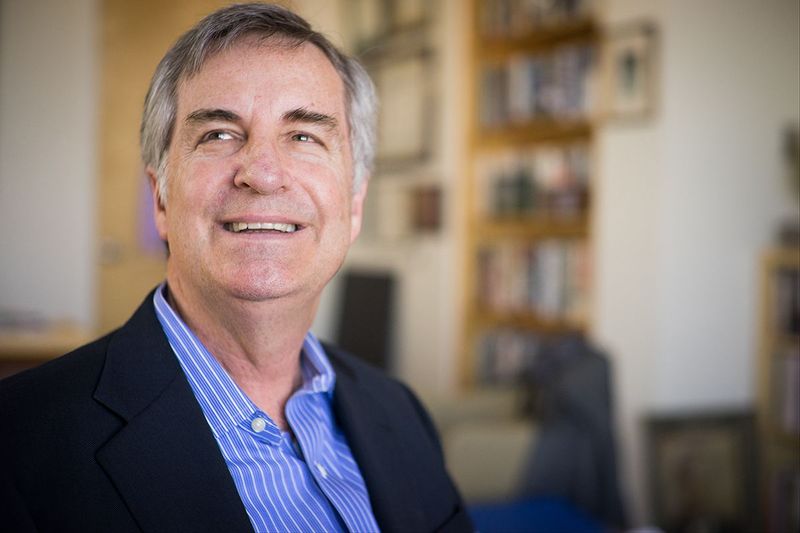 Mark Roosevelt became president of St. John’s College in Santa Fe on January 1, 2016. He is the seventh president of the campus.

Roosevelt brings a history of accomplishing daunting tasks and a lifelong commitment to educational quality and equity. He earned his undergraduate and law degrees at Harvard University, where as a student he entered Massachusetts politics at a time of extraordinary racial conflict, serving as the campaign manager for the first African American ever elected to the Boston School Committee.

When Roosevelt was elected in 1986 to the Massachusetts State Legislature, he became chief sponsor of the “Gay Rights Bill,” which had failed to pass for more than two decades.  After a tumultuous struggle, Roosevelt guided the bill into law in 1989, making Massachusetts only the second state in the nation to prohibit discrimination based on sexual orientation in employment, housing, credit, and public accommodations.

In 1990 Roosevelt was named chair of the House Committee on Education. In that role he was the chief sponsor and co-author of the 1993 Education Reform Act, a comprehensive law that fundamentally restructured the way the Commonwealth funds and manages its public schools. More than 20 years later, the act still serves as the national model for comprehensive state action to guarantee school districts equitable resources and the accountability measures necessary for school improvement. As a result of the act, Massachusetts leads the nation in almost all categories of student and school performance.

After running for governor of Massachusetts as the Democratic nominee in 1994, Roosevelt served as managing director of the Massachusetts Business Alliance for Education, and as an adjunct professor of politics and head of the Gordon Public Policy Center at Brandeis University.

Wanting to play a more active role in the critical issues facing the country, in 2003 Roosevelt trained to be a large city school leader at the Broad Superintendents Academy, and in 2005 he was appointed superintendent of the Pittsburgh Public Schools (PPS). Under his leadership, PPS closed underperforming schools, implemented a more rigorous curriculum, met federal achievement guidelines for the first time in its history, and won a nationwide competition for a $40-million grant from the Bill and Melinda Gates Foundation to improve teacher effectiveness. In perhaps his most lasting achievement, Roosevelt founded The Pittsburgh Promise, which guarantees college scholarships for Pittsburgh students who meet certain academic standards, and secured a $100-million donation to get it started, one of the largest donations ever to an American public school system. To date, The Pittsburgh Promise has sent more than 6,000 students on to higher education as Promise Scholars.

In 2011 Roosevelt was hired to engineer the recreation of Antioch College, the innovative liberal arts school in Ohio, which had been closed in 2008. Roosevelt and his colleagues preserved Antioch’s long-standing commitment to social activism and cooperative education and expanded the College’s capacity to provide meaningful engagement with the world through intentional links between classroom and experiential education. Observers credit Roosevelt with having restored the faith of alumni, recruited highly committed teachers and students, led the college to fast-track regional accreditation, and most importantly, crafted a comprehensive strategic plan that offers Antioch a realistic chance to regain its stature as a school that charts new ground in higher education.

An avid student of American history and a voracious reader, Roosevelt especially admires Abraham Lincoln. Asked why, Roosevelt told the Dayton Daily News: “[Lincoln’s] ability to do tough things — and he was asked to do many tough things — but to do them with as much gentleness and kindness as could be mustered, and yet firmness when he had to be firm — I think he got as much done with what he was given as is humanly possible. He also suffered enormously, and yet he just gave and gave and gave of himself to people, and he continues to give to this day to those of us who choose to dig in and listen to him.”

In a career marked by taking on large challenges, Roosevelt sees his role at St John’s in a different light. He sees the college’s program as not only healthy but transformational. He believes that, working with the entire St. John’s community, his mandate is “to spread the gospel” - to increase awareness about St. John’s to the many students who would thrive at the college and to enhance its financial resources so it can continue to offer its inspirational education to many future generations.

“There is no other college like ours in the world, and no faculty or student body more dedicated to and passionate about learning,” he has written. “The program demands extraordinary commitment, and St. John’s challenges students to widen their horizons, overcome their fears, and even — in an era of hyper-partisan contentious discourse — change their minds. When a student comes to terms with nuance, ambiguity, and intellectual uncertainty — not to mention Ptolemy and Apollonius — she leaves college ready to navigate the challenges of modern life.”

Roosevelt, a great-grandson of President Theodore Roosevelt, is married to Dorothy Roosevelt and is the father of two children, Matthew and Juliana. 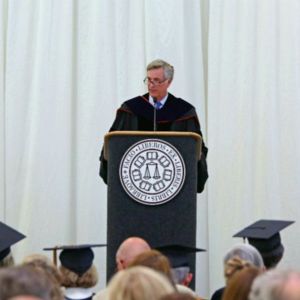 Roosevelt speaking at his Inauguration 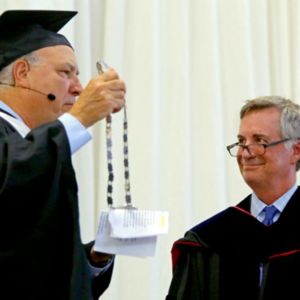 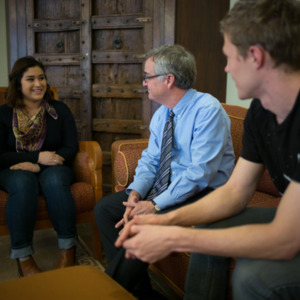 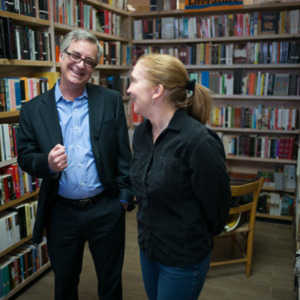 Roosevelt speaking with tutor Julie Reahard in the Bookstore 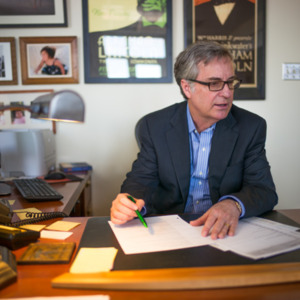 Roosevelt in his office