Hiding behind Geometry: Analysis and Synthesis in Descartes and Spinoza 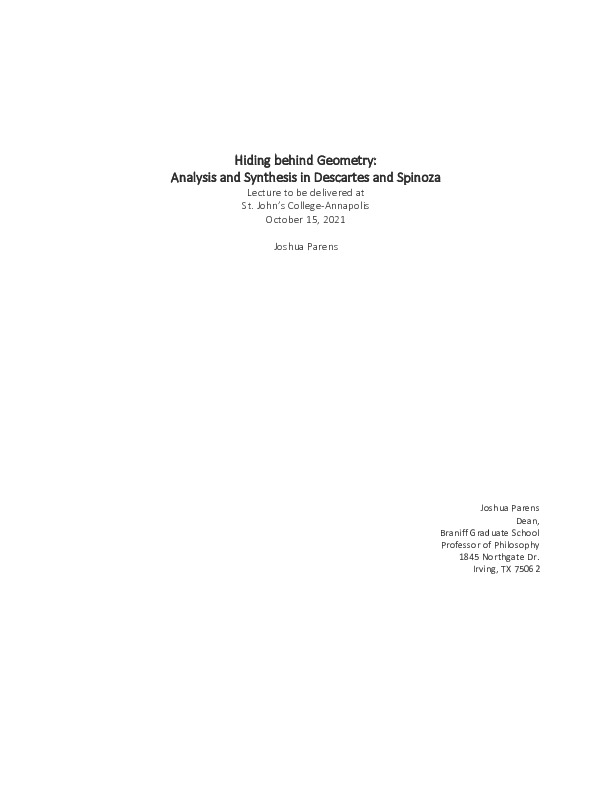 Hiding behind Geometry: Analysis and Synthesis in Descartes and Spinoza

Typescript of a lecture delivered on October 15, 2021, by Joshua Parens as part of the Formal Lecture Series.

Dr. Parens is the Dean of Braniff Graduate School of Liberal Arts, the Director of the Institute of Philosophic Studies, the Philosophy Graduate Director, and Professor of Philosophy and Politics
at the University of Dallas.

Dr. Parens describes his lecture: "Spinoza published only two works in his lifetime: his Theologico-Political Treatise anonymously and his synthetic presentation of Descartes's Principles of Philosophy, called Descartes's "Principles of Philosophy," the sole writing to which Spinoza attached his name. Despite knowing that Descartes claimed philosophy, especially metaphysics, should be presented only analytically, Spinoza presented most of his Ethics (published posthumously) especially its metaphysical parts in synthetic form. This lecture will explore the many, at times conflicting, things Descartes wrote about analysis and synthesis, consider what he means by them, and attempt to determine what motivated Spinoza to present the Ethics as he did."

A signed permission form has been received stating: "I hereby grant St. John's College permission to: Make a typescript of my lecture available online."