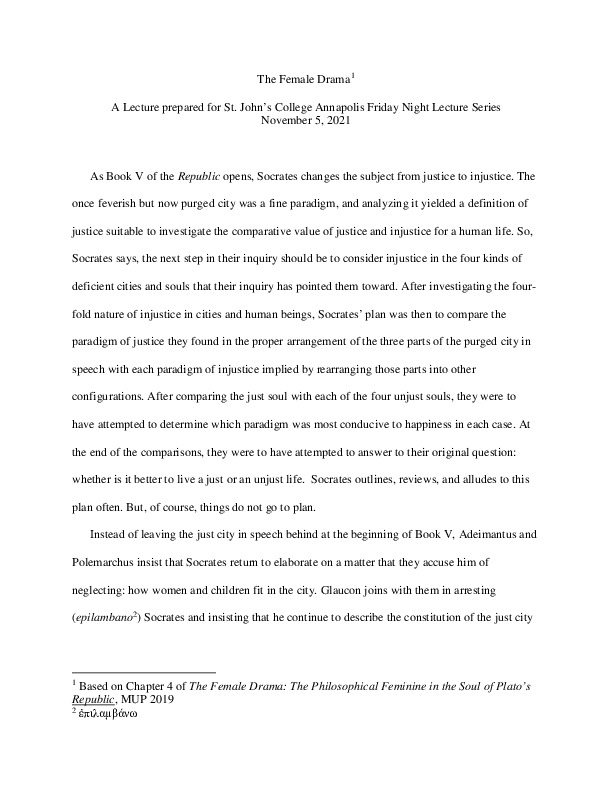 Typescript of a lecture delivered on November 5, 2021, by Charlotte Thomas as part of the Formal Lecture Series.

Dr. Thomas is Professor of Philosophy from Mercer University in Atlanta and Co-Director of the McDonald Center for America’s Founding Principles. She was named the Executive Director of Association for Core Texts and Courses in 2020.

Dr. Thomas describes her lecture: "At the beginning of Book V of the Republic, Adeimantus and Polemarchus interrupt Socrates to say that he has neglected to explain something he had earlier said in passing about the role of women and children in the city in speech. Socrates admits that although the 'male drama' is complete, that he has indeed neglected these matters in the hope that he could avoid them entirely in their conversation. But with fear and trembling, prostrating himself to Adresteia and asking forgiveness for the hubris he fears he is about to display, he agrees to present the 'female drama.' Thus begins the notoriously difficult and controversial middle part of the Republic. One of the things that makes the middle books so difficult is that Socrates leans precipitously into constructing political structures which until this point of the dialogue he has been careful to remind his interlocutors were meant to function as paradigms to help them understand individual justice. But, although Socrates is quieter and more subtle about the teachings of the female drama for moral psychology, he is not silent. In this paper I will attempt to illuminate some of the hints we are given about the implications of the middle books of the Republic (especially Book V) for its teachings on the soul and investigate their place in the Republic as a whole."