The Pursuit of Happiness: Four French Thinkers on Our Restless Quest for Contentment 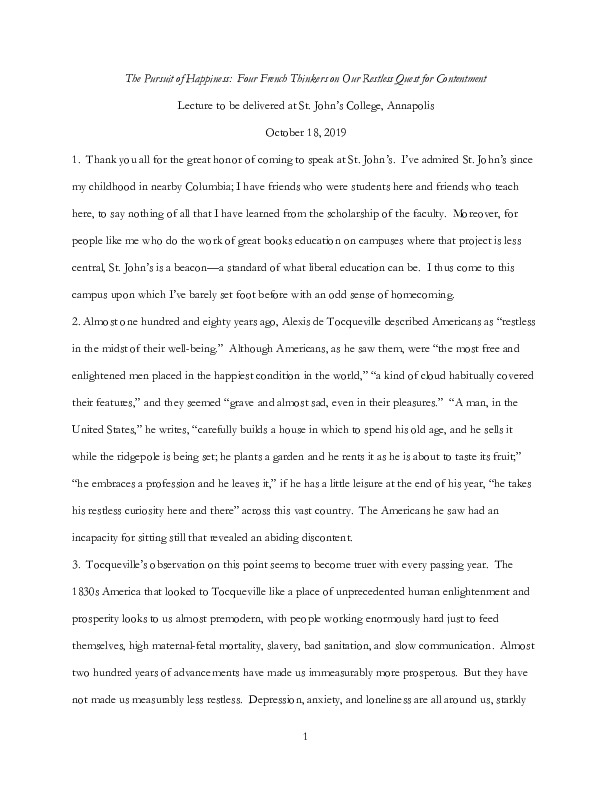 The Pursuit of Happiness: Four French Thinkers on Our Restless Quest for Contentment

Typescript of a lecture delivered by Benjamin Storey, Associate Professor, Department of Politics and International Affairs, and Co-Director of the Tocqueville Program at Furman University, on October 18, 2019 as part of the Formal Lecture Series. The introduction to Storey's lecture was not recorded.

Storey describes his lecture topic as follows: "In 1840, Alexis de Tocqueville famously observed that Americans are 'restless in the midst of their well-being'—strangely uneasy even as they enjoy unprecedented prosperity. This talk will consider the long French tradition of thinking about restlessness that lies behind that observation. It will begin by showing how the great essayist Michel de Montaigne seeks to quiet our restlessness by teaching us a new way of pursuing happiness, a way of life distinguished by the central place it accords to the modern virtues of skepticism, authenticity, and nonchalance. Turning next to Pascal and Rousseau, the paper will consider their separate and distinctive critiques of the Montaignean pursuit of happiness, which, in their view, deepens the very restlessness it is intended to palliate. The paper will conclude with a consideration of Tocqueville’s analysis of American politics in the light of his insight into the psychological unease of the American citizen, and an argument for how we might pursue happiness better by reconsidering some of the assumptions of modern skepticism from which we began."